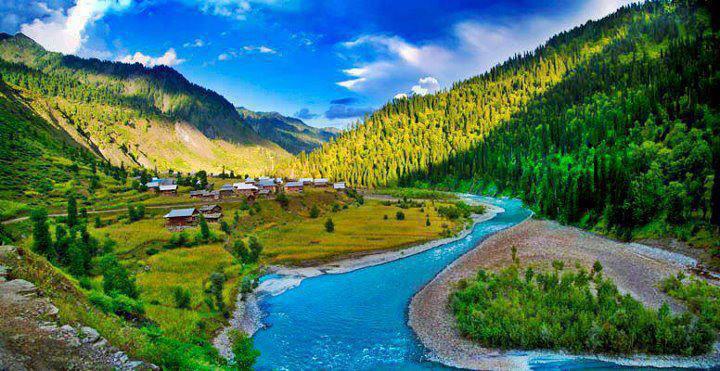 Neelum valley is one of the beautiful places of Azad Kashmir and it’s named after the river which has curves like snake and has blue color. It is also called as the “PARADISE OF KASHMIR”. There is a contradiction that this valley was named after a precious stone called Neelum.
Neelam Valley is located in Azad Kashmir Region. Neelam valley is a 144 km long bow-shaped deeply forested region in Azad Kashmir . In addition to that there is also LOC (LINE OF CONTROL) where relatives can cross the bridge and can meet their relatives on the other side of the bridge twice a month. There is a tourist seventeen century fort built by the town’s founder, a chief of the Chak tribe named Muzaffar Khan, to ward off the Mughal armies of Emperor Akbar.

The most amazing and full of captivating views valley  is situated at the North & North-East of Muzaffarabad, running parallel to Kaghan Valley. The two valleys are only separated by snow-covered peaks, some over 4000m above sea level. Excellent scenic beauty, panoramic views, towering hills on both sides of the noisy Neelum river, lush green forests, enchanting streams and attractive surroundings make the valley a dream come true.
This land also has many local fruits which are of great taste including Apples, Apricots, Walnuts and Plums which are famous. A large number of tourists visit it in summers. The whole valley gives fascinating and beautiful scenery. There is also a mountain “SARWALI” (6326 meters) which is one of the highest mountains in Azad Kashmir.

Some important areas of Neelum valley are as follows:

KUTTON AND JAGRAN:
It is situated in the lower part of Neelum valley, Jagran Nullah (stream) plays pivotal role in the formation of its landscape beauty and charm which reveals the richness of the area. For the convenience of tourists, AJK tourism Department has constructed a rest house here. A mega hydro electric project is installed here that produce electricity to the state.  A long a beautiful series of Himalayas mountain starts from here to Kaghan, Skardu and Chillas.

ATHMUQAM:
It is situated at a height of 1371m, it is the sub-divisional headquarters of the area. It is an attractive place known for its variety of fruit. All necessary facilities via bazaars, post offices, banks, hospitals, and telephone exchanges are present. Neelum – at a distance of about 9 Km from Athmuqam, Neelum is situated on the right bank of the river Neelum at 1524m above sea level with fascinating scenery. The panoramic lush green valley is profound in fruit and wildlife.

SHARDA:
A breath-taking green spot at an altitude of 1981m. Shardi and Nardi are two mountain peaks overlooking the valley, reputedly named after legendary princess Sharda. It has a captivating landscape with numerous springs and hill-sides covered with trees. On the right bank, opposite Sharda, the Neelum is joined by the Surgan Nallah along which a track leads to Nurinar Pass and through it to the Kaghan Valley. Ruins of an old Buddhist University can also be found in Sharda.

KEL:
A small valley situated at a height of 2097m. This is another picturesque place in the Neelum Valley. The Shounter Nallah joins river Neelum at this place and leads to Gilgit Agency (Northern Areas) over the Shandur at 4420m.

The area is famous for its dishes like Gushtaba. The Kashmiri people love this food and are their most favorite. People eat rice a lot. They don’t consider a luch or a meal with not having rice. Tabak Maaz is also quite eaten in this valley and  the preparation of which is considered an art and a point of pride in Kashmiri culture.

People of this valley make good handicrafts aswell which include Carpet, Namda, Gubba. They are also famous for their Silk Woolen Clothing. People also make Woolen shawls. Besides all these they are also good at Wood Carving and in making Rugs.